This is what is called “faith” 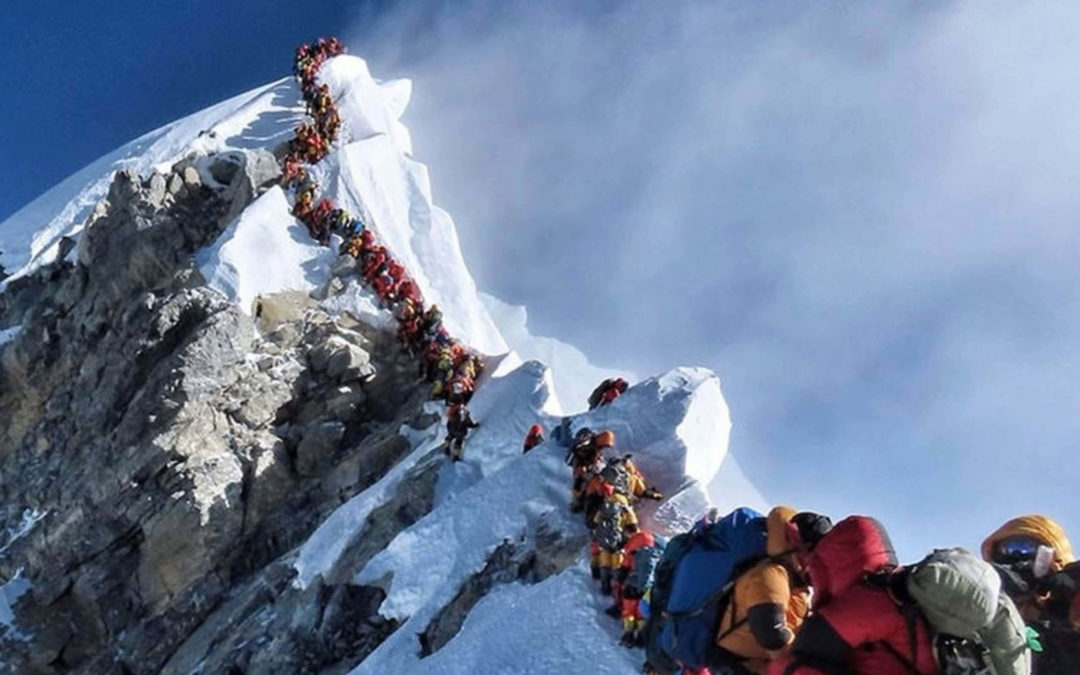 Erik Weihenmeyer made it to the top of Mount Everest, the highest peak on earth and the highest graveyard in the world (see photo of people nowadays climbing to the summit). Since Edmund Hillary conquered the summit for the first time in 1953, thousands of people aimed to reach the summit. More than 300 had died on this mountain. Most of the bodies were left behind. Would anyone dare to climb this dangerous route in complete darkness?  Erik did – he is blind. On the way up, and also on the top of Everest, his friends described to him the beauty of the peaks covered with snow. That was the only way he could “see” that, which to him, was invisible.

We can learn from this experience of Erik something about faith – seeing and experiencing the invisible. This was said about Moses: He (Moses) reckoned that to suffer scorn for the Messiah was worth far more than all the treasures of Egypt, for he kept his eyes on the future reward.   It was faith that made Moses leave Egypt without being afraid of the king’s anger. As though he saw the invisible God (Heb. 11:26, 27).

Erik followed the sound of a bell which was carried by a friend who walked in front of him. He trusted this friend with his life; one step in the wrong direction and Erik’s dead body could also have been left behind. Jesus said that if we belong to Him we will follow Him like sheep are following the shepherd: My sheep listen to my voice; I know them, and they follow Me (John 10:27).

Erik endured severe cold, gale force winds and paralysing fatigue. But that made the achievement so much more fulfilling. We also have to endure the storms of life, but which may enrich us so much that in the end we may look back and say: “I have grown spiritually through these experiences. I wouldn’t have missed it for anything.”

Erik had to climb, like anyone else, the entire way up to the top. However, he would never have made it without his friends. God encourages us to have friends who will help us in our spiritual journey. Friends who will encourage us, who will want to share our spiritual experiences, and who will pray with us: For God has not destined us for wrath, but to obtain salvation through our Lord Jesus Christ,  who died for us so that whether we are awake or asleep we might live with him.  Therefore encourage one another and build one another up, just as you are doing (1 Thess. 5:9 – 11).

In this life we may not see the marks in the hands of Jesus or the loving face of the Father, but we can trust God as if we see the Invisible. This is what is called “faith”.

Dear God, thank You that I can trust You with everything. Although I cannot see You I know that You love me.  Amen.

It was the custom in the village where D.L. Moody ... END_OF_DOCUMENT_TOKEN_TO_BE_REPLACED

When it comes to life, I would much rather have... END_OF_DOCUMENT_TOKEN_TO_BE_REPLACED

First story: A young man was terminally ill. He had... END_OF_DOCUMENT_TOKEN_TO_BE_REPLACED