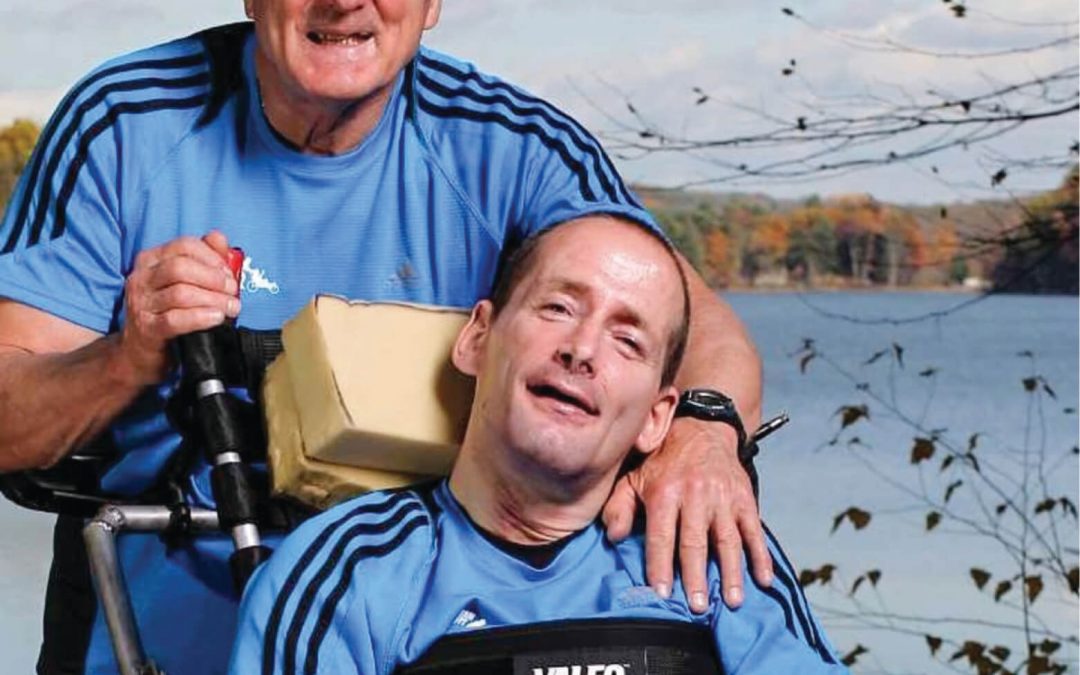 Rick Hoyt was cerebrally disabled since birth. His father, Dick, loved him dearly and did everything he could for him. Rick even obtained a degree from Boston University. He had a dream that one day he would complete a triathlon, which was totally impossible in his condition. But his father took up the challenge. During a triathlon in 1990 in Hawaii, his father swam 4 km in the ocean while pulling Rick along on a type of raft. Then he picked up Rick’s limp body, carried him to a special bicycle and peddled for 200 km with his son. After that his father carried him to a wheelchair and ran with him for 41 km. They finished just inside the cut-off time. At the finish it was announced that the son had finished the race, yet he did not swim, peddle or run a meter. The father did it all.

Our heavenly Father loves us and does everything for us through Jesus Christ. “For God loved the world so much that he gave his only Son, so that everyone who believes in him may not die but have eternal life” (John 3:16). This is how we know what love is: Christ gave his life for us (1 John 3:16). Like Rick we face a race that is impossible for us to run. Jesus says: “Without me you can do nothing” (John 15:5). He knows that we are weak. Our strength lies in the Lord: I can do all things through Christ who strengthens me (Phil. 4:13). People may say that they run the race themselves, but it has actually been the Father doing it every step of the way.

God is powerful enough to have created the universe. Wouldn’t He have power enough to carry us through life? God is with each of us, today, at this hour, at this minute. His perfect love for us won’t increase if we improve, nor weaken if we fail. If we are too tired to continue, He will carry us. If we stumble and fall, He will pick us up.

When asked what Rick would like to do for his father, he replied: “What I would like is that my dad would sit in the chair and that I could push him once.” That’s the voice of a thankful heart. It is inconceivable to receive all the love from our heavenly Father without asking what we can do for Him. We can show our gratitude by doing his will.

Dear Father, I give myself unconditionally to You because I know that You will carry me through life. Amen.

It was the custom in the village where D.L. Moody ... END_OF_DOCUMENT_TOKEN_TO_BE_REPLACED

When it comes to life, I would much rather have... END_OF_DOCUMENT_TOKEN_TO_BE_REPLACED

First story: A young man was terminally ill. He had... END_OF_DOCUMENT_TOKEN_TO_BE_REPLACED