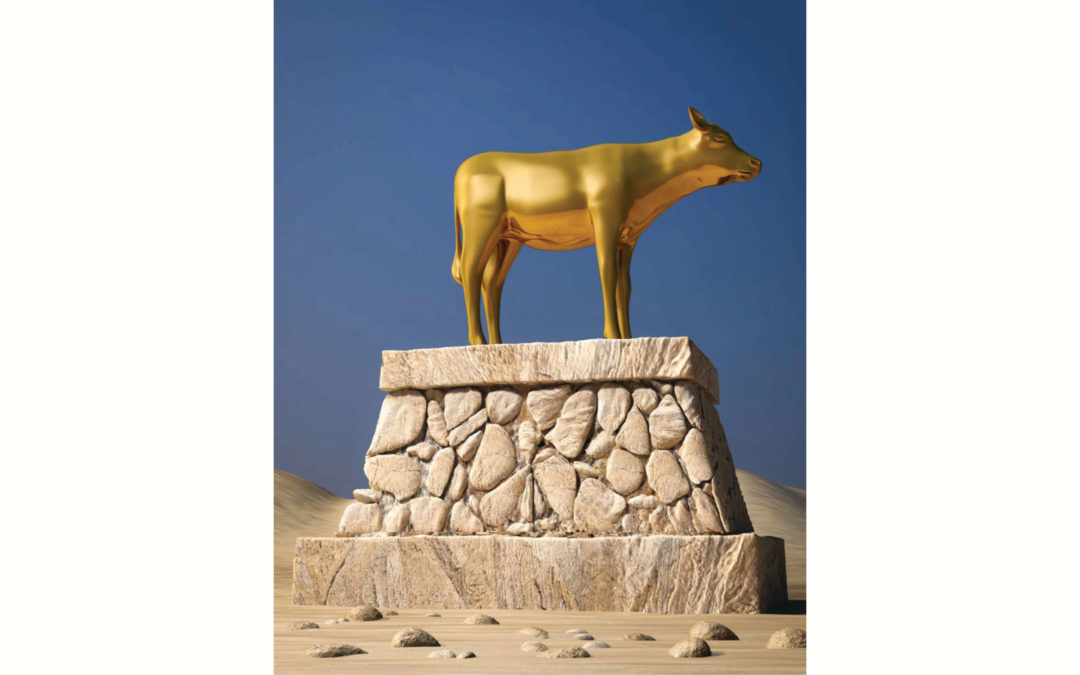 The Israelites left Egypt for Canaan. God ordered Moses to meet Him on Mount Sinai. Moses was on the mountain for 40 days. The people were in the desert and without their leader. As with any desperate person they sought God’s presence, but they couldn’t see God and started doubting. Then the people built a calf of gold and said: Exod. 32:4-5 “Israel, this is our god, who led us out of Egypt!”  Then Aaron built an altar in front of the gold bull-calf and announced, “Tomorrow there will be a festival to honour the LORD”.

It seems as if the people built an image to worship an idol. But the original word for “LORD” which Aäron uses here is “Jahwe” and it is the name of the God whom the people have always worshipped, and whom we still worship today. They thus produced an image or body which God could, so to speak, enter into, to be with them and where they could see Him. What the people had done was against the will of God. Moses made that very clear when he descended from the mountain.

God understands our problem of wanting to see Him. For us to be able to see Him, God doesn’t use a golden calf. The greatest miracle happens. He Himself comes to earth in Jesus: John 14:9 Jesus said to him, “Whoever has seen me has seen the Father.”  For the Pharisees it was difficult to recognise God in Jesus. They perceived God as One who condemns and a God of rules and laws: You may only walk thus far on the Sabbath, even if you are hungry you may not thresh grain by hand on the Sabbath, you must not let yourself become unclean by being too close to a sinner, etc, etc. Jesus is totally different: He prays for those who condemn and crucify Him: Luke 23:34 Jesus said, “Forgive them, Father! They don’t know what they are doing.”  He turns water into wine on a wedding feast so that the feast could continue (John 2:2-10). He eats with tax collectors and sinners (Mark 2:15-16). He washes the feet of the disciple who would betray Him, of another who would deny Him. He meets a criminal on the cross and takes him Home with Him. (Luke 23:29-34).

Had Jesus still been on earth as a human being, only the people in close proximity to Him would have been able to see and touch Him in person. It is however now possible to see God everywhere, in people who invited God into their lives: Rev. 3:20 “I stand at the door and knock. If anyone hears my voice and opens the door, I will come in to him and eat with him, and he with me. Jesus says to each one of us, that He wants to be in us to celebrate with us.

One day a missionary, who wished to work amongst an isolated group of people, started telling them about Jesus, about his love for them, etc. The people responded: “But we know him, he stayed here with us for a while.” The man then realised that they had recognised Jesus in the previous missionary.

Often one can just look at a child and then know who the father is. We cannot see God, but we can see his children – those in whom God lives.

Our heavenly Father, thank you for the knowledge that You love us so much that You came in Jesus and that You come and live in us.  Amen

Fill your mind with happiness, hope, feelings of security and... END_OF_DOCUMENT_TOKEN_TO_BE_REPLACED

God wants to do something big in your life. Don’t... END_OF_DOCUMENT_TOKEN_TO_BE_REPLACED

No matter what happens in life, be nice to people.... END_OF_DOCUMENT_TOKEN_TO_BE_REPLACED