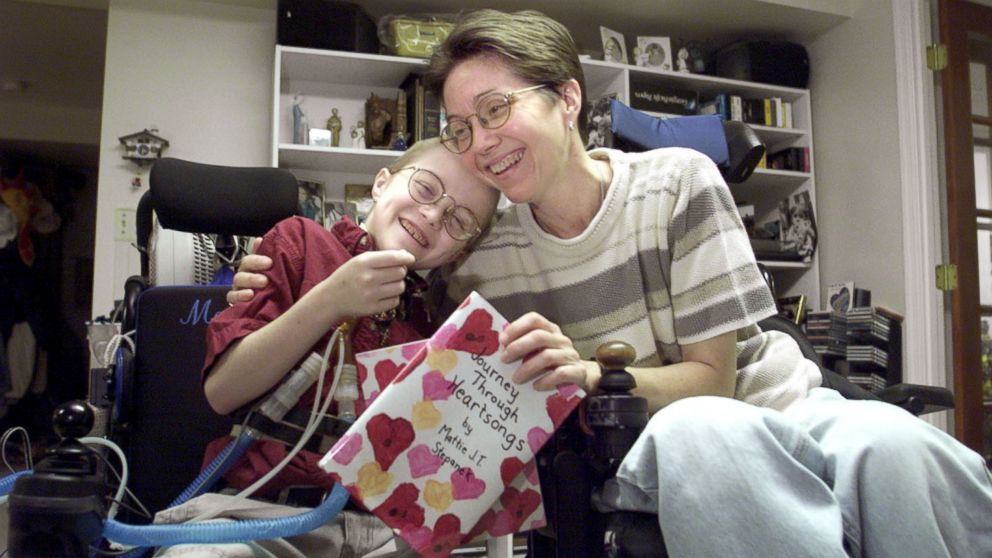 Mattie Stepanek had a disease with which he battled since he was born in 1990. The disease kept him in a wheelchair which was connected to medical aids that controlled his breathing, heart-beat, blood pressure, body temperature, and digestion. His two brothers and sister died during childhood from the same disease. His mother also uses a wheelchair because she has the adult form of this disability. At the age of 3, Mattie started to write poetry to cope with the death of his elder brother. His first five books dealt with “Heartsongs” and all of them made the New York Times‘s Best Seller list. He wrote that a “Heartsong’ is a person’s special gift to be shared with others… or a person’s ‘reason for being.”

From his poem “Making Real Sense of the Senses”: Our hands are for feeling, / But also for hugging and touching gently./ Our mouths and tongues are for tasting,/ But also for saying words like / ‘I love you,’ and / ‘Thank you, God, for all these things’

Mattie liked to speak about peace and global tolerance. He spoke to school children and business leaders, medical personnel and church groups. Mattie also shared his messages of hope and peace on Larry King Live, Good Morning America, Primetime, and other TV programs. He inspired millions of people around the world.

He said he got his strength from God and his mom, and also from the people who became part of his life. Mattie died in 2004, when he was only 13. At his funeral Jimmy Carter, former president of America, said: “I’ve known many kings and government leaders, but Mattie Stepanek is the most extraordinary person that I have ever known.”

It is amazing how God used this child to bring the message of peace to people and to inspire them to celebrate life. That was during a time when Mattie was suffering so much. For him a miracle from God was “Just to make it through another day.” Sometimes he also asked: “Why me?”, but then he would immediately ask: “Why not me?” His philosophy of life was: “Remember to play after every storm!”

Actually, Mattie didn’t die, he only went to a better place, to be with God for ever and ever. God promises: He (God) will change our weak mortal bodies and make them like his own glorious body (Phil. 3:21). He will wipe away all tears from their eyes. There will be no more death, no more grief or crying or pain. The old things have disappeared” (Rev. 21:4).

Mattie left many videos behind on the internet that still inspire millions of people. He also left his wheelchair and his medical aids behind. He does not need them anymore!

Our heavenly Father, thank You for the inspiring life of Mattie. Help us to celebrate the life You have given us. Amen

Fill your mind with happiness, hope, feelings of security and... END_OF_DOCUMENT_TOKEN_TO_BE_REPLACED

God wants to do something big in your life. Don’t... END_OF_DOCUMENT_TOKEN_TO_BE_REPLACED

No matter what happens in life, be nice to people.... END_OF_DOCUMENT_TOKEN_TO_BE_REPLACED