The Chilean Miners (with Afrikaans audio) 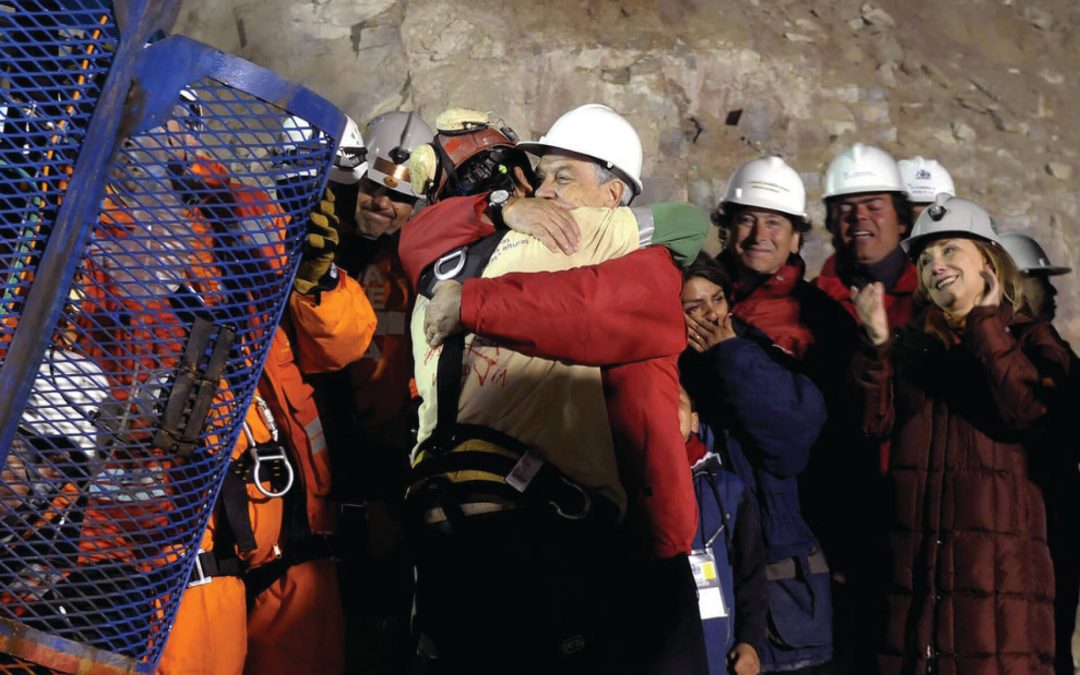 On October 13, 2010 more than a billion people around the world looked at an amazing rescue operation on TV. In Chile 33 miners were trapped deep underground in a mine for 69 days. They were pulled out in a small capsule, one by one – a process that took 22 hours. Most (perhaps all) of the miners wore special yellow T-shirts, made and sent down to them by the Chilean branch of Campus Crusade for Christ. Across the front of the T-shirts were the words, in Spanish: “Thank you, Lord.” The miners had requested these words. A quotation on the back of the shirts was from Scripture.  “In His hands are the depths of the earth, the heights of the mountains are His also” (Ps. 95:4).

While the miners were still trapped underground, Campus Crusade also provided them with MP3 players with the audio version of the “Jesus” film. They also received the Bible in audio format. Rev. Aldredo Cooper, the chaplain to the President of Chile, said of the rescued miners: “They’re all wanting to testify to the Lord Jesus Christ. All 33 of them are saying that they found God in the mine. Five or six were already Christians before the accident and they held services down in the mine. Many went down with no faith at all but they all say this: ‘We were not 33; we were 34 because Jesus Christ was with us down there.’”

One miner, Mario Sepulveda, told reporters, “We never lost faith. We knew we would be rescued. I have been with God and I’ve been with the devil. I seized the hand of God. I always knew God would get us out of there.”

A medic was sent down the rescue shaft before the miners were brought up. He had to prepare each one of the miners for the rescue. This was an important step in the operation. Isn’t that a picture of what God did? He sent his Son down to us so that we could be rescued.  “I am the living bread that came down from heaven. If you eat this bread, you will live forever” (John 6:51). Jesus gave Himself, the living bread, to us on the cross so that we can live forever. He descended to us to come and show us the extent of God’s love. For God loved the world so much that he gave his only Son, so that everyone who believes in him may not die but have eternal life (John 3:16).  Through sin we all became estranged from God, but Jesus descended so deep that  He Himself was forsaken by God in order to save us. On the cross He called out: “My God, my God, why have you forsaken me?” (Mark 15:34). Jesus only asks us to enter the “rescue capsule” – to accept Jesus as our Saviour and Redeemer.

Like the miners, we were all in darkness. But Jesus came down to be our light. He said, “I am the light of the world. He who follows Me shall not walk in darkness, but have the light of life” (John 8:12) And, “I have come as a light into the world, that whoever believes in Me should not abide in darkness” (John 12:46).

Thank you God that You love us so much that You came down in Jesus Christ to this world to rescue us.  Amen

Fill your mind with happiness, hope, feelings of security and... END_OF_DOCUMENT_TOKEN_TO_BE_REPLACED

God wants to do something big in your life. Don’t... END_OF_DOCUMENT_TOKEN_TO_BE_REPLACED

No matter what happens in life, be nice to people.... END_OF_DOCUMENT_TOKEN_TO_BE_REPLACED