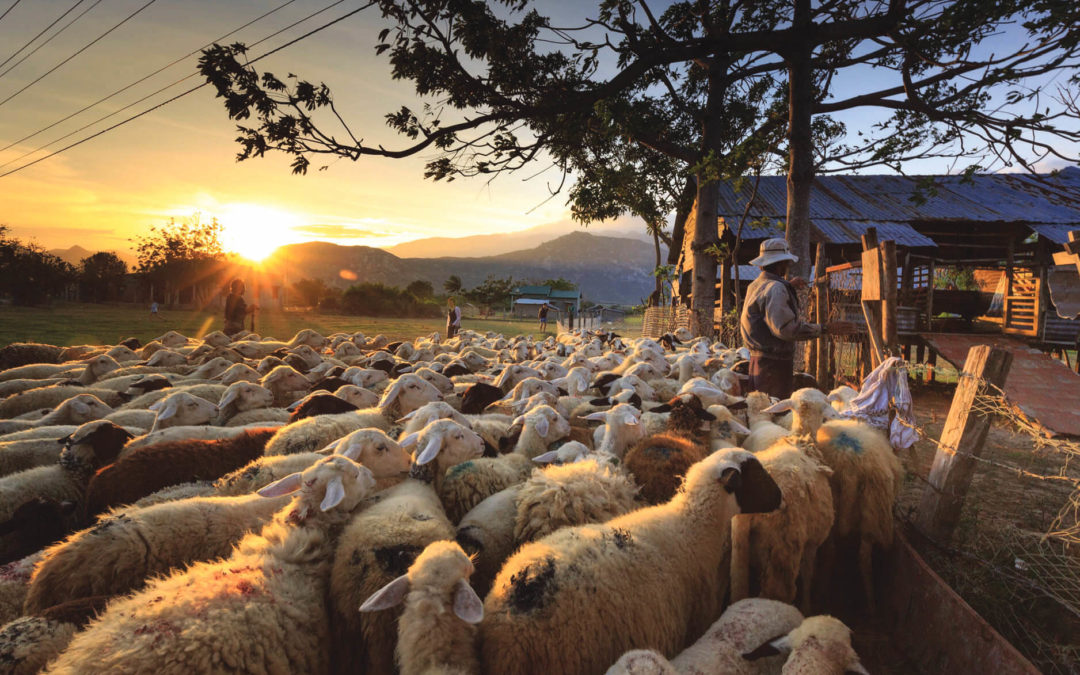 In Biblical times, and even today in many places, sheep follow their shepherd. Most of the time they don’t see their shepherd. They watch where they are going and search for grass to graze. They follow the shepherd’s voice, his whistle and his commands.  They trust that the shepherd is present even when they don’t see him. They trust his guidance.

David, once a shepherd himself, writes: The LORD is my shepherd; I shall want nothing. He makes me lie down in green pastures, and leads me beside the waters of peace (Ps. 23:1-2). As a good shepherd is for his sheep, so the Lord is for us. Jesus earned this peace for us by taking our sins upon himself and by his suffering and death on the cross, like a lamb that is led to the slaughter. This Isaiah had already predicted in 700 BC: But he was wounded for our transgressions; he was crushed for our iniquities; upon him was the chastisement that brought us peace, and with his stripes we are healed. All we like sheep have gone astray; we have turned–everyone–to his own way; and the LORD has laid on him the iniquity of us all. He was oppressed, and he was afflicted, yet he opened not his mouth; like a lamb that is led to the slaughter, and like a sheep that before its shearers is silent, so he opened not his mouth (Is. 53:5-7).

That which was predicted happened. Jesus was arrested without him resisting or fleeing. Jesus was taken to Pilate where he was falsely accused. Then we read: But he said nothing in response to the accusations of the chief priests and elders. So Pilate said to him, “Don’t you hear all these things they accuse you of?” But Jesus refused to answer a single word. The soldiers beat and mocked him. Thereafter they took him away to be crucified (Matt. 27:12 14).

Of Jesus it is said: In the beginning the Word already existed; the Word was with God, and the Word was God … Through him God made all things; not one thing in all creation was made without him (John 1:1-3). Even though Jesus is the “Word”, he didn’t utter a word against those who caused him suffering. He could have spoken, but he didn’t. He could have obtained assistance from his Father (Matt. 26:53), but he didn’t. He did that because he is the Lamb of God who came and had to suffer for us, and had to be sacrificed for our sins. His suffering brought us redemption.

Jesus rose from the dead after three days. He is the King of all kings, before whom every knee shall bend. To his children he is the Lamb of God, the Good Shepherd. Jesus Himself says: “I am the good shepherd, who is willing to die for the sheep” (John 10:11)

And then Jesus appoints us to be good shepherds! He asks Peter: Do you love me?” Peter said to him, “Lord, you know everything; you know that I love you!” Jesus said to him, “Take care of my sheep” (John 21:17).

If we say we love God, and believe that Jesus is our Good Shepherd, then we must also be good shepherds, shepherds who feed the Lord’s sheep. This means that we will tell people how Jesus had reconciled us to God. It also means that the love and attitude of Jesus should be seen in us, in our behaviour towards all people.

Our heavenly Father, thank you for Jesus, the Lamb of God, who was sacrificed for us. Thank you that Jesus is our Good Shepherd. Help us to follow Him. Amen

Fill your mind with happiness, hope, feelings of security and... END_OF_DOCUMENT_TOKEN_TO_BE_REPLACED

God wants to do something big in your life. Don’t... END_OF_DOCUMENT_TOKEN_TO_BE_REPLACED

No matter what happens in life, be nice to people.... END_OF_DOCUMENT_TOKEN_TO_BE_REPLACED