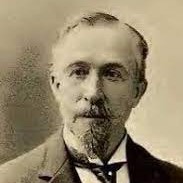 First story: A young man was terminally ill. He had never taken any notice of God or his commandments and lived for worldly pleasures. Someone visited him and told him about Jesus our Redeemer. He told the young man that Jesus had also borne hís sins on the cross, that Jesus’ blood was also shed for hím and that Jesus would also forgive him hís sins. The young man then confessed his sins and surrendered his life to the Lord. He was filled with peace and joy. Days later the person who had helped him visited him again. The young man was depressed. The visitor then wanted to know what was wrong, did he doubt his salvation, or was he afraid to meet God when he dies? The young man replied: “I am not afraid to die.  But I deeply regret wasting all the days of my life.  How will I meet my dear Saviour empty-handed?  I have not served Him even for a day.”

The person who had helped the young man told all this to C.C. Luther (see photo). Luther then wrote the following hymn (in 1886): Must I go, and empty handed, Thus my dear Redeemer meet? Not one day of service give Him, Lay no trophy at His feet? Not at death I shrink or falter, For my Savior saves me now; But to meet Him empty-handed, Thought of that now clouds my brow. O the years in sinning wasted, Could I but recall them now, I would give them to my Saviour, To His will I’d gladly bow. O ye saints, arouse, be earnest, Up and work while yet ’tis day; Ere the night of death o’ertake thee, Strived for souls while still you may.  The hymn has become one of the most popular songs in churches around the world. God used the witness of this young man, only a few words, to reach thousands of people. The young man did not meet his dear Saviour empty-handed after all!

Second story: Varia was a 19 year old girl who, as a supporter of communism, had caused Christians a lot of harm during the persecution of Christians in Russia. After she had surrendered her heart to the Lord, she could not remain silent about her new life in Christ. For that she was jailed. Her friend, Maria, visited her and wrote: “The poor girl is so hungry … she was thin, pale, beaten. Only her eyes shone with the peace of God and with an unearthly joy.” Subsequently Varia was sent to a labour camp in Siberia. There they had to work 13 hours every day with almost nothing to eat. Varia wrote to Maria from within the camp: “I feel the desire to tell and to witness to everybody about the great joy of salvation, which I have in my heart. … My heart is so full that the grace of God overflows. At work, they curse and punish me and give me extra work because I cannot be silent, and must share with everybody what the Lord has done for me. He has made me a new being, a new creation … I will witness to everybody about his great love.” (Richard Wurmbrand: Tortured for Christ)

People who are touched by God’s love become new beings: Anyone who is joined to Christ is a new being; the old is gone, the new has come. All this is done by God, who through Christ changed us from enemies into his friends and gave us the task of making others his friends also. Our message is that God made all human beings his friends through Christ. God did not keep an account of their sins, and he has given us the message which tells how he makes them his friends (2 Cor. 5: 17 -19).

The young man and the girl in the two stories knew that they had been saved by grace. The desire to do something for their Redeemer was not motivated by the wish to be saved, but out of gratitude for having been saved. Paul writes: For the love of Christ compels us (2 Cor. 5:14).

Our heavenly Father, fill also our hearts anew with the love of Christ. Amen.

It was the custom in the village where D.L. Moody ... END_OF_DOCUMENT_TOKEN_TO_BE_REPLACED

When it comes to life, I would much rather have... END_OF_DOCUMENT_TOKEN_TO_BE_REPLACED

Do what you do so well that they will want... END_OF_DOCUMENT_TOKEN_TO_BE_REPLACED